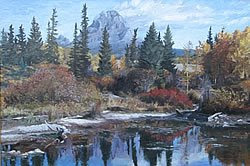 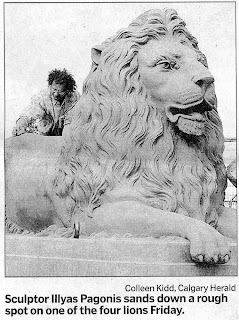 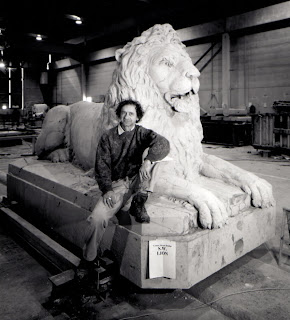 If you're at all a regular at Pegasus Wednesdays over the past 5 years or so, you've probably seen a wild-haired Greek sitting in with us from time to time playing violin. Illyas Pagonis isn't mentioned anywhere on this website yet so I thought I'd correct the oversight. He's one of the Hipsters' best friends and patrons, and we're hoping he'll do the cover art for our next album - you see, Illyas is a pretty phenomenal painter and sculptor. Among his many sculptural projects was the restoration of Calgary's Centre Street Bridge lions. In 1999 the Centre Street Bridge received a major overhaul. Prominent on the bridge were sculpted lions sitting on top of kiosks on the four corners of the bridge. Having been built in 1916, the lions had badly deteriorated. It was decided that the original lions would have to be replaced with exact replicas. Illyas Pagonis did the work. He also designed some of the prehistoric park at the Calgary Zoo. As a visual artist, Illyas' depictions of the Canadian west are represented locally by the Virginia Christopher gallery. He and his wife Margo just celebrated 30 years of marriage. Yiasou Illya!
Posted by rembetikahipsters at 7:32 AM No comments: